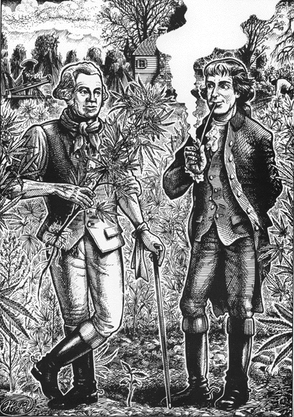 Marijuana was not always illegal in America; in fact, it was once a crime to not grow pot. The Jamestown settlers brought a stash of marijuana when they crossed the ocean to the New World in 1611. While these Puritans did not sit around and get high, they did grow hemp as part of their contract with the Virginia Company. Hemp, the fibrous byproduct of the marijuana plant, was a valuable and useful commodity used for making linens and other goods. In 1762, Virginia awarded bounties for hemp production and even imposed fines on those who did not grow the crop. During these early days, marijuana was still widely used for medicinal purposes. The Oxford scholar and English clergyman, Robert Burton, suggested cannabis to treat depression.

Even the Founding Fathers of the United States grew hemp. George Washington grew cannabis on his plantation for about 30 years, from around 1745 to 1775. His records indicate he was interested in the medical properties of this important plant and took strides to increase the potency of his crop. Washington also separated males from females, a clear indication that at least some of the crop was going to be ingested rather than used for rope. While historians agree that Thomas Jefferson grew hemp, it is believed that he did not ingest the plant.

Near the turn of the century, Napoleon brought marijuana (and the Rosetta Stone) from Egypt to France. French scientists began to study cannabis and physicians began to prescribe it as a pain reliever and sedative. Marijuana started to gain acceptance in Western medicine, widely practiced in the United States. During these days, patients drank cannabis tincture made with alcohol rather than smoking the dried plant.

By the 19th century, medical marijuana was a mainstream remedy for menstrual cramps, muscle spasms, rabies, epilepsy and a variety of other ailments. Physicians also recommended this medicine to relieve headaches, increase appetite and as a sleep aide. Cannabis made its way into the U.S. Pharmacopeia, the official public standards-setting authority for all prescription and over-the counter medicines. This publication states that cannabis is an effective treatment for neuralgia, tetanus, cholera, dysentery, anthrax, alcoholism, drug addiction and more.

Cannabis began to lose popularity, and its legal status, early in the 19th century. Driven by a concern over opium use, an anti-narcotics movement began to sweep the nation. The Progressive Movement looked to the government to ensure social purity. In 1906, the U.S., Canadian and British governments came to an official consensus on the need to control the opium trade.

California became the first state to outlaw cannabis in 1913. President Woodrow Wilson signed three bills into law in 1915 that banned the import and export of opium except for medicinal purposes. One of these bills required that physicians encode each prescription for opium or derivative of opium with a special registration number; this number could only be obtained through the U.S. Internal Revenue Service. Although these bills do not apply to medical marijuana, they lay the foundation for federal drug regulation.

Federal regulation was on the horizon for all medical marijuana, both in the United States and in the rest of the world. Up until World War I, pharmacologists in the USA imported medical marijuana from India. This is because the U.S. Pharmacopeia specifically required medical marijuana to be from the flowering tops of the Indian variety of cannabis. In 1913, the U.S. Department of Agriculture Bureau of Plant Industry announced it has produced a variety of cannabis as potent as the Indian variety. When the war interrupted the supply of cannabis from India, the US quickly became self-sufficient in growing this plant. By 1918, pharmaceutical farms east of the Mississippi river were producing more than 60,000 pounds of marijuana annually. In 1925, the League of Nations authorizes the use of cannabis for only scientific and medicinal purposes. This is the first international law restricting the use of marijuana.

During the next few years, anti-cannabis extremists create sensational and incredible stories about marijuana that made consumers uneasy about using marijuana even for medicinal purposes. These tales included acts of violence and rape, sudden insanity and worse. Many outlandish stories were published in newspapers run by William Randolph Hearst, who reportedly had interests in the lumber and paper industries which were in direct competition with the makers of hemp paper. By the end of 1936, all 48 states had adopted laws regulating marijuana. While medical marijuana was still allowed, its use as a pain reliever declined because of the surge in discoveries of other analgesics, like aspirin and morphine.

In 1937, the U.S. federal government enacted the Marijuana Tax Act, despite the objections of the American Medical Association. This law levied a tax on everyone who grew, sold or bought marijuana. This law made it more difficult and expensive to prescribe medical marijuana than other drugs so physicians quit recommending it. Eventually, medical marijuana faded from favor. Marijuana was removed from the U.S. Pharmacopeia in 1942.

In 1970, Congress passed the Controlled Substance Act which classifies substances like narcotics and psychotropic drugs. Marijuana is placed in the Schedule I category, which classifies marijuana as “having a high potential for abuse, no currently accepted medical use in treatment in the United States, and a lack of accepted safety for use of the drug or other substance under medical supervision."
The Netherlands decriminalize marijuana in 1976. That same year, a Washington, DC man with glaucoma successfully defends himself against criminal charges of marijuana cultivation on the grounds that growing cannabis was a medical necessity. On November 24, 1976, Robert Randall became the first American to legally use medical marijuana.

New Mexico became the first state to pass a law recognizing the value of medical marijuana in 1978. While this new law, known as the Controlled Substances Therapeutic Research Act, allowed for continued research of medical marijuana in strictly controlled environments, it did not legalize medical marijuana in the sense that a person could get a doctor’s prescription and head to the pharmacy. Over the next few years, more than 30 U.S. states pass similar laws. Despite the evidence provided by well-documented scientific research and the softening states’ attitude towards medical marijuana, cannabis remained a Schedule I drug according to federal law.

In 1990, Miles Herkenham, Senior Investigator at the National Institute of Mental Health, and his research team identify the cannabinoid receptor system. This important discovery helps scientists understand the pharmacology of marijuana, or how the THC in cannabis works in the brain.

The next year, the state of Florida ruled that a person must be suffering from a medically-recognized condition that is causing a symptom that only pot can relieve before he is eligible to purchase medical marijuana. It seemed the courts were more hesitant to accept medical marijuana than were doctors. A 1991 survey of members of the American Society of Clinical Oncology showed a surprising number of clinicians willing to prescribe marijuana in the treatment of emesis, or nausea and vomiting, among cancer patients. Of the 599 respondents of this survey, 53 percent favored making marijuana available by prescription. Even more stunning was the admission of 44 percent of respondents who said they had already recommended marijuana to patients.

In that tumultuous year of 1991, the first medical marijuana initiative passed in San Francisco, California. Proposition P called on the State of California and the California Medical Association to restore marijuana to the list of available medications and to not penalize doctors for prescribing pot to their patients for medical purposes. In the meantime, medical researchers continue to make discoveries, such as the discovery of the brain’s natural version of THC. Researchers named this substance anandamide, the Sanskrit word for ‘eternal bliss’ or ‘supreme joy.’

Federal lawmakers were slower to see the light. Despite mounting evidence pointing to the benefits of medical marijuana, the US Court of Appeals decided in 1994 to keep marijuana as a DEA Class I narcotic. Reclassifying this substance as a Class II would have allowed doctors to prescribe marijuana without fear of interference and prosecution by the federal government. Voters in California sent a message to the federal government in 1996 when they passed Proposition 215 which permits patients and their primary caregivers, with a doctor’s permission, to possess and cultivate marijuana for the treatment of symptoms associated with AIDS, cancer, muscle spasms, migraines and other disorders.

Marijuana debate, research and consumption roll on through the decades. Progress has been exceptionally slow in the United States; since California took the lead in 1996, only 15 more states have legalized medical marijuana. Cannabis cultivation or consumption is still illegal on a federal level. Perhaps someday it will again be a crime to not grow pot.